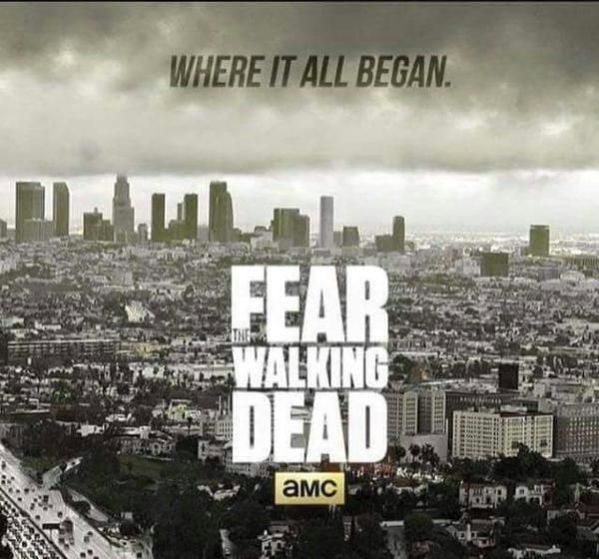 It’s finally here! Fear the Walking Dead premiered last night after months of waiting and you know what? It was pretty good. I’d read some stuff online that said it started out kind of slow, but I really actually enjoyed it. I thought it was a little predictable at certain points. Not in a bad way or an “oh my gosh I saw that coming”, but in a “Is this what’s gonna happen? I think this is what’s gonna happen. It happened!” sort of way which I thought just made it better.

Set in sunny California, Fear the Walking Dead follows Madison Clark, her boyfriend, Travis Manawa, an her two children, Nick and Alicia, as well as several other characters we haven’t officially met yet, during the early days of the apocalypse.

Oh, he has no idea how true this statement is.

It’s kind of funny, and they talked about this a bit on Talking Dead last night before the premier, but the people watching Fear the Walking Dead know more about the apocalypse and what’s coming than the characters in the show do.

When all the characters are freaking out because people seem to be turning into cannibals that don’t die, we all know what’s going on. We all know how to kill them (“kill shot bitch” was a fantastic line) so it’s funny to see how these characters deal with things.

It’s going to be interesting to see how each of the different characters deals with things when they do fully realize what’s happening. They’re all so different and even though we’re only one episode in they’re all so interesting already.

I felt so bad for Nick because he just thought he was losing his mind. At first he thought the drugs he had taken were making him hallucinate, but then he shot someone and when he went back the body was gone and he thought he was going crazy and it was so sad because we all know he’s not crazy! There’s just dead people walking around.

I’m really excited for the next couple episodes where we’ll meet the other characters because if they’re anything like (or unlike) the ones we’ve met so far the show can only get better.

The characters were actually something I’d thought a lot about before the premier last night. Fear the Walking Dead is a spin-off of The Walking Dead and when you have a two shows that are so closely connected people will inevitably make comparisons and I was curious as to how this show would compare to The Walking Dead. However, as soon as the show started I wasn’t even thinking of TWD. It wasn’t until after the episode that I kind of thought of the differences and the similarities.

Even though the two shows are connected they’re so different which is great because it didn’t feel like watching a spin-off, it feels like you’re watching a totally different show which is exactly what you are doing and I think this just proves that FTWD will be great.

However, a similarity I did see was in the characters. Not that the characters in FTWD are the same as or similar to the character in TWD, but that they are such distinct characters. The Walking Dead has characters that are pretty iconic now so to make a spin-off series with a whole new cast who has no connections to the old one can be risky, but it’s actually great. These characters are new and exciting and I think are on their way to becoming iconic themselves.

The thing with spin-off shows is that they can either end up being amazing or they can crash and burn. So far, one episode in, Fear the Walking Dead seems to be on it’s way to being amazing. The characters (how tired are you of reading that word) are interesting, the storyline keeps you on the edge of your seat, and the whole show is really entertaining.

I have high hopes for Fear the Walking Dead and am looking forward to watching episode two next Sunday.

Did you watch the series premier? What did you think?

Check out the video below to see what’s happening this season!